A little adventure with stock street car Vs heavely modified, cut up and for drifting purposes made car. 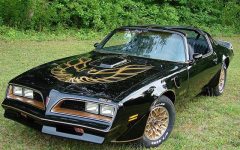 The second generation Pontiac Firebird was delayed until the end of February, 1970 because of some engineering problems. Second generation changed Bird’s styling from Coke bottle like to swoopy one which was characterized with large C-pillar until 1975. Later rear window was enlarged and pillar got smaller.  The second Firebird also had quite a ….. →